I’ve been having an eventful winter eating season. Here is what I’ve covered on the Portland Sustainable Foods Examiner site:

Field & Vine offers 19 Dinners In the Field 2015
Visit the farm, vineyard, or urban winery and enjoy a dinner by Chef Pascal Chureau crafted from the bounty of the field. I attended the first dinner of 2015 at Southeast Wine Collective, Portland.

Heritage Distilling Co. crafts Washington spirits
Gig Harbor is home to a craft distiller that not only makes vodka from wine grapes, but also allows you to come distill and age your own spirits.

Nodoguro pop-up serves up food to match its awards: Chef Ryan Roadhouse wows diners with his elevated Japanese cuisine served at pop-up dinners with a monthly theme. I attended his Twin Peaks dinner in February, 2015. The food was an umami-bomb – packed with soul-satisfying flavor.

Chefs Week PDX:
I was going to skip this excellent event, but as Top Chef came to the finals and Gregory Gourdet and Doug Adams were in the top three, I had to go.

Chefs Week PDX: Cascadia By Fire dinner review: One ticket was remaining so I knew it was meant for me. A great evening at Ned Ludd with an amazing elk shank from Top Chef fan favorite Douggie Adams.

Chefs Week PDX: West Coast 2015 Review: The finale dinner – 24 courses, 27 chefs including the top 3 from Top Chef. Best of all, at my table were Cristina Baez and Elena Roadhouse, whose pop-ups I was booked to attend.

Purringtons Cat Lounge:
I communed with the kitties while enjoying coffee and a cookie on their first full day of operation. I was a little disappointed that the cats were being cats – a little standoffish, deigning to play with a toy.

Beast has New Chairs! And a truffle dinner to remember. The chairs at Beast were so famously uncomfortable, that half of the diners at our table said the announcement of new chairs was enough to bring them back.

A Kitchen Box: Great subscription for the home cook and food lover. 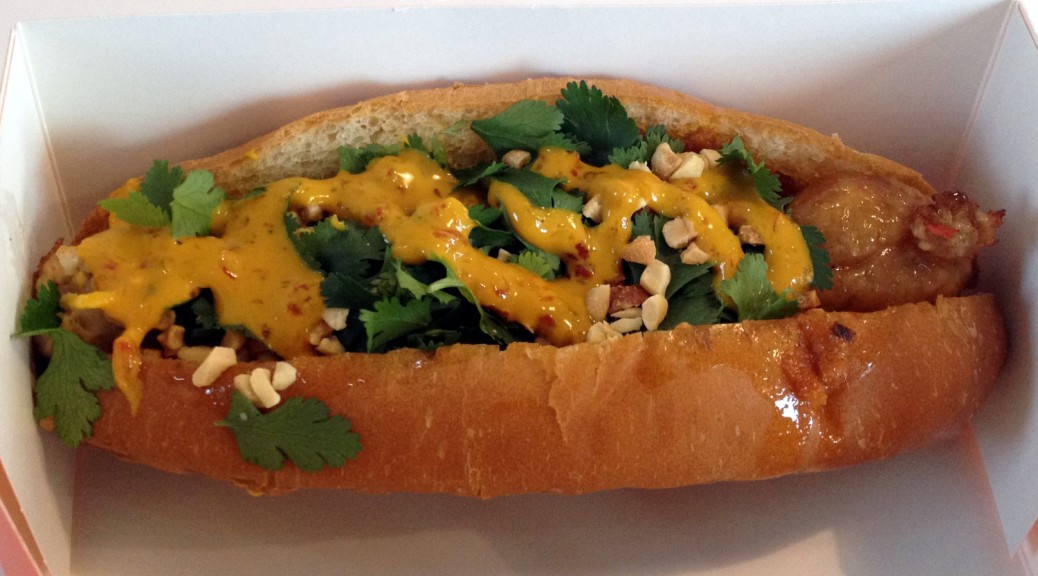 I heard about Clutch Prime Sausagery from Chris Angelus of Right at the Fork. The first outpost opened in the Cedar Mill area at Timberland Town Center on Barnes Rd., and it sounds like one is planned for the Portland airport area. I had to find food while waiting on a relative’s day surgery at St. Vincent Medical Center, so I jaunted over to give it a try.

These are not standard sausages. They are “craft sausages from thoughtfully sourced ingredients.” It’s not just a meat sausage with toppings in a bun, there are elements of each dish inside the sausage, plus it is dressed with further elements that come together for delicious dishes.

I tried the Pad Thai Chicken sausage. It was made of chicken but included spicy peanut sauce, thai chili sauce, hot mustard, cilantro and peanuts. It cost $10, which is the average price other than a $7 hot dog. You order when you enter the bright white restaurant and the friendly server is happy to explain the concept.

I was a little surprised when it arrived in just a couple of minutes and it seemed fairly small for a $10 sausage, appearing to be maybe a quarter pound sausage. It didn’t come with any chips or other sides. Then I took a bite and kind of swooned. Wow, big flavor throughout the bite. The sausage was full of a dance of different flavors, which combined with the toppings. OK, this not-so-big sausage was going to make a great meal experience! I savored every bite and was satisfied. I have vowed to return.

I hope they find a good audience from the surrounding condos and apartments. I’m thinking a lot of young professionals live in strolling distance and may help Clutch be a hit. I’m looking forward to their airport location as that will be much closer to the ‘Couv. They are open daily from 11:30 am – 8 pm. 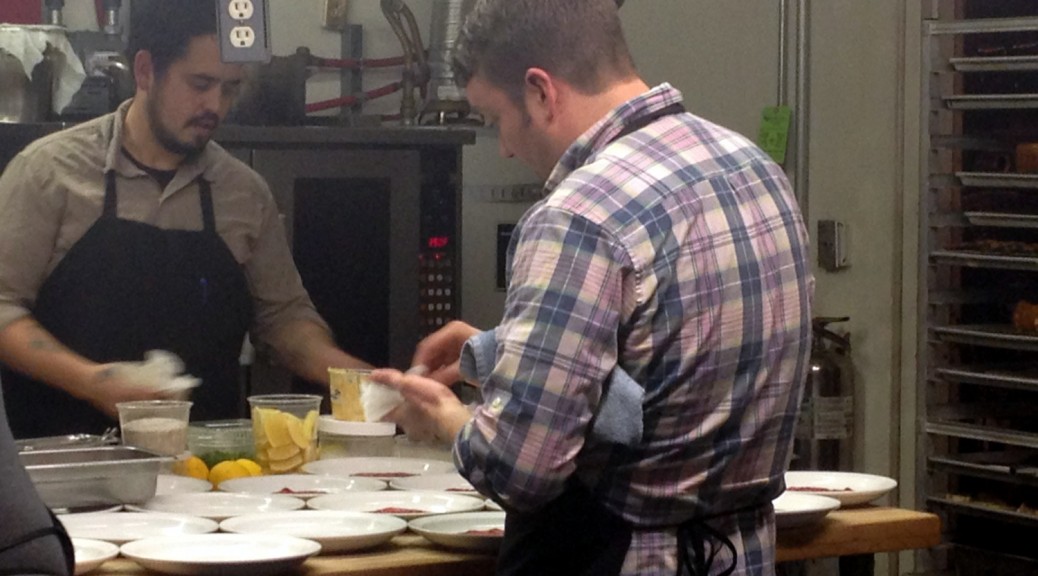 The new team at Laurelhurst Market delivered a great Portland Food Adventure dinner on February 5, 2015. Executive Chef Ben Bettinger cut his teeth in the Portland culinary scene at Paley’s Place, then joined cocktail master Kevin Ludwig’s Beaker & Flask in 2009. Together they quickly earned the honor of Willamette Week’s Restaurant of the Year for their innovative cuisine and cocktails. It was there that I learned what a craft cocktail could be, and found myself eating pickled octopus and pork cheeks and loving it.

Alas, that partnership came to an end when Bettinger was lured away by Vitaly Paley to open Imperial. Meanwhile, Patrick McKee also honed his craft at Paley’s Place and served as Executive Chef there since 2012. Both Bettinger and McKee were Paley’s sous chefs during his Iron Chef America victory in Battle Radish in 2011.

Portland Food Adventures is a type of pop-up that invites chefs to design an exciting menu paired with beverages and booked at an all-inclusive price. I’ve been attending them faithfully for the past four years and I’m never disappointed. The next dinner will be at Paley’s Place with their new Chef de Cuisine Luis Cabanas and a new French/Russian focused menu.

We assembled at Simpatica dining hall, which is owned by Laurelhurst Market. The starter was a “Grounded for Life” cocktail poured by Kevin Ludwig. It was a refreshing and complex mix of pepper vodka, cointreau, fresh celery juice, lime and a salted rim. A smoked salmon rillette with fennel on crostini was the passed appetizer.

We sat down for a pleasant evening with our individually printed menus. The first course of coffee rubbed beef carpaccio, Oregon truffles, grana padano and pickled onions was superb. The 2013 Schloss Gobelsburg Gruner Veltliner went well. It was followed by a classic Beaker and Flask dish of pan-seared veal sweetbreads, creamed kale, pickled yellow foot chanterelles and sweet onion agrodolce. I knew my friend Krista would be green with envy as she loved their sweetbreads. This was paired with a Norwegian Negroni cocktail with Krogstad aquavit, cynar, sweet vermouth and orange oil.

The third dish was the classic grilled pork cheeks, pickled octopus, braised peppers and onions on grilled bread with aioli. Weird and wonderful as usual!

Now for the beef. Smoked ribeye, grilled spinella, braised rib tip marmalade and roasted bone marrow. How’s that for different preps? We also passed around grilled romaine with salsa verde and feta. Everything was great, served with a Rioja.

The dessert was also too delicious to pass up, an olive oil pound cake with orange marmalade, creme fraiche and toasted almonds.

Bravo for Ben, Kevin and Patrick! I stopped in at Laurelhurst Market on Sunday for a Meetup historic walking tour. All three were deep into dinner prep. I enjoyed a sandwich (great bahn mi!) and hope to return soon for dinner.

Exploring food and travel in Oregon and Washington